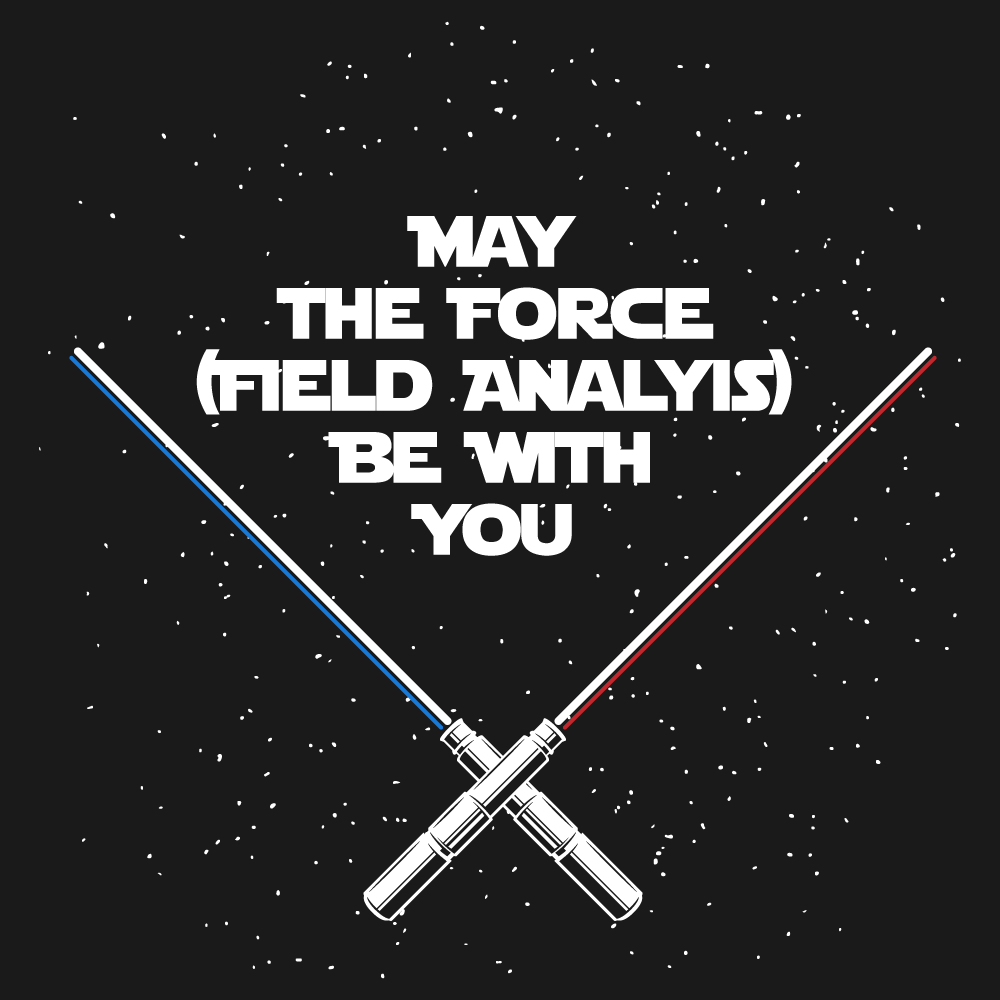 May the Force (Field Analysis) Be With You. I don’t want to disappoint Star Wars fans but it wasn’t George Lucas who created the ‘Force’.

That honour goes to another American, psychologist Kurt Lewin.

Mr Lewin (or should that be Jedi Lewin?) developed Force Field Analysis which he describes as: “An issue is held in balance by the interaction of two opposing sets of forces. Those seeking to promote change (Driving Forces) and those attempting to maintain the status quo (restraining forces)

You may think by Star Wars link (and how good was Rogue One by the way!) was a little tenuous. But if you think it about it, it’s not a million miles (or should that be light years?) away from the films. On one hand, you had evil Darth Vader using the Force to maintain the status quo.  And on the other hand you had the heroic Luke Skywalker using the Force to promote change.

A good and easily understood example, in a food manufacturing environment, is where a food safety culture survey has identified a poor attitude to hand washing across food handlers. The resulting Field Force Analysis can be seen below. The objective is to understand the dynamic balance between the Driving Forces and the Restraining Forces so a strategy can be put in place to move the dynamic balance in favour of the Driving Forces.

How to undertake a field force analysis

3. Document the Field Force Analysis model on a flip chart and add the proposed changes and current status and share this with the group.

4. Discuss with the group what will happen if no action is taken.

7. Open frank discussion should then be encouraged in order to determine if change can take place and how viable the implementation of the changes would be. Where change is viable then group should agree, what changes need to be implemented and develop an action plan.

8. Field Force Analysis is a changing process and it is important to remember that increasing the Driving Forces or decreasing the Restraining Forces may also create new forces.

See, it’s just like Star Wars. If you want to know more then jump in the Millennium Falcon and come to see us, or you could just give us a call of course!

We use cookies on our website to give you the most relevant experience by remembering your preferences and repeat visits. By clicking “Accept All”, you consent to the use of ALL the cookies. However, you may visit "Cookie Settings" to provide a controlled consent.
Cookie SettingsAccept All
Manage consent

This website uses cookies to improve your experience while you navigate through the website. Out of these, the cookies that are categorized as necessary are stored on your browser as they are essential for the working of basic functionalities of the website. We also use third-party cookies that help us analyze and understand how you use this website. These cookies will be stored in your browser only with your consent. You also have the option to opt-out of these cookies. But opting out of some of these cookies may affect your browsing experience.
Necessary Always Enabled
Necessary cookies are absolutely essential for the website to function properly. These cookies ensure basic functionalities and security features of the website, anonymously.
Functional
Functional cookies help to perform certain functionalities like sharing the content of the website on social media platforms, collect feedbacks, and other third-party features.
Performance
Performance cookies are used to understand and analyze the key performance indexes of the website which helps in delivering a better user experience for the visitors.
Analytics
Analytical cookies are used to understand how visitors interact with the website. These cookies help provide information on metrics the number of visitors, bounce rate, traffic source, etc.
Advertisement
Advertisement cookies are used to provide visitors with relevant ads and marketing campaigns. These cookies track visitors across websites and collect information to provide customized ads.
Others
Other uncategorized cookies are those that are being analyzed and have not been classified into a category as yet.
SAVE & ACCEPT
Powered by